Thank you for your patience while we retrieve your images.

44 photos
Blue Whale, largest whale, and the largest creature ever to inhabit the earth. Blue whales are found in all oceans of the world. Most populations migrate extensively, traveling from the Tropics or near Tropics in winter to the edges of the pack ice in the northern and southern hemispheres in summer. Blue whales produce loud, low-frequency moans that can be heard in deep ocean waters from more than 160 km (100 mi) away. It is likely that they communicate by means of these moans, enabling the members of a group to remain in contact across a vast expanse of ocean.

Blue whales may reach 30 m (100 ft) in length; mature females are usually slightly longer than mature males. A small dorsal fin is set far back on the body. The skin has a light-gray-and-white mottled pattern, which appears light blue when the whale is just below the surface of the water on a sunny day. The mottled pattern, which is unique to each animal, has been used by researchers to identify individual whales.

Blue whales feed by lunging open-mouthed into dense groups of small sea creatures such as krill or fish. As water and food rush into the whale's mouth, more than 60 throat pleats expand so that the whale's throat, or gular pouch, forms a huge bag that extends from the front of the whale's snout to its navel. The whale then partially closes its mouth, leaving a small gap, and forces water past 270 to 390 pairs of wide, black, fringed baleen plates that hang from the roof of the mouth. The plates act as a sieve, catching food inside the fringes. Blue whales often lunge through their prey side by side, apparently using each other to block the escape of their prey.

Mature females may give birth once every two or three years. Mating occurs during the summer season, and the gestation period lasts about 11 months. A single young is usually born the following spring; twins are rare. The young nurse for seven or eight months, gaining as much as 90 kg (200 lb) per day.

Blue whales were heavily hunted for oil, baleen, meat, and other products from the 1930s to the 1960s. This hunting nearly caused the extinction of the species. They are now protected and may gradually be returning in several areas of their range; since 1985, blue whales feeding in Monterey Bay, California, have become a familiar sight in late summer. The blue whale is classified as an endangered species.

Scientific classification: The blue whale belongs to the family Balaenopteridae of the suborder Mysticeti, order Cetacea. It is classified as Balaenoptera musculus. 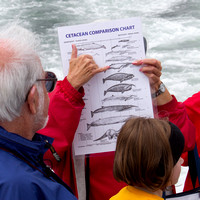